Giving birth during a global pandemic – A tribute to my midwife

For my second pregnancy, I opted for my antenatal care to be provided at the midwife-led birth unit at Croydon University Hospital rather than via the community midwives. The idea was that I would receive continuity of care before, during and after the birth of my baby. I was assigned a dedicated midwife, Sophie, who I would see at all my appointments pre and post birth and hopefully during the delivery itself. This continuity of care made a massive difference throughout – and certainly when I needed it most.

At the start of my pregnancy I didn’t envisage that I would face giving birth during a global pandemic. I was into my last trimester when news of COVID-19 broke and 23 March - the beginning of lockdown in the UK - coincided with my last day at work prior to starting maternity leave. Clearly this was not an ideal time to be pregnant given the uncertainty around the impact of the virus on pregnant women and babies. Naturally I felt an increased sense of anxiety about keeping well and the birth itself. My midwife supported me wonderfully during this time. She reassured me that maternity care and departments would of course be prioritised and, having built a good relationship throughout my pregnancy, I felt able to rely on her advice and guidance.

In the days leading up to the birth, I was unsurprisingly nervous about what the experience would be like. I knew my husband would be allowed to be present provided we both stayed well but would have to leave soon after the baby was delivered. And, of course, my midwife would be wearing PPE. Furthermore, the hospital was one of the worst hit in the country for COVID-19. This meant that the later antenatal appointments and the birth itself were really affected.

I went into labour on 13 April – three weeks after the start of lockdown and at the peak of the pandemic. I was filled with trepidation when I arrived at the hospital, but I needn’t have worried. I was lucky to find that my midwife, Sophie, was on shift, and she swiftly took control of the situation and put me well at ease. It was initially challenging as my husband was not allowed into the delivery suite as I was not yet in active labour, but once labour progressed Sophie ensured the situation remained calm and controlled. Less than seven hours after arriving at the hospital, we welcomed our son Jack into the world. Sophie and the other staff looked after me brilliantly until we were released from hospital later that day, ensuring Jack and I had time and space to bond. I cannot fault the high standard of care and the professionalism shown by all the staff during what was clearly an extremely difficult and challenging time for both staff and the women in their care.

Five weeks on from the birth, and now we’re all settled in at home as a family with Jack’s big brother Sam (well, as settled as it’s possible to be during a very unsettling time). I’d like to say thank you again and pay our tributes to my fantastic midwife. Sophie, I really couldn’t have done it without you. 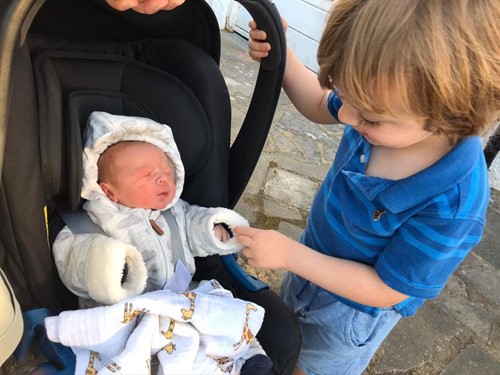