The birth rate is sky-high and resource planning is struggling to cope. Midwives talks to Dr Rod Jones about his future forecast and asks why the dark clouds weren’t spotted looming on the horizon.

More babies were born in England in 2010 than in any year since 1972. The baby boom isn’t a new revelation - the statistic is almost a year old.

The 32,000 plus who have signed the RCM’s e-petition will know that this is the reason it is calling for ‘urgent action’, demanding 5000 more NHS midwives and pushing for a Commons debate on the issue.

But a revelation that Midwives can report is that the baby boom is likely to last until at least 2016.

It is only then that it will gradually begin to tail off, according to research by healthcare forecaster Dr Rod Jones.

It is worrying news for maternity services that are already under-staffed, under-resourced and over-stretched. And with the government’s grip due to tighten on NHS coffers under Andrew Lansley’s contentious reforms, the future allocation of midwifery resources is facing turbulent times.

To calculate the duration of the baby boom, Dr Jones charted previous years’ birth rate statistics for England and Wales.

The jagged line in Figure 1 shows the peaks and troughs in birth rate from 1938 to 2010. The first big spike – and the highest by some way – comes after the end of the Second World War.

Before this period, in which the red line almost shoots off the top of the chart, it plummets into a deep trough for the years when Europe was torn apart by war.

‘It’s not surprising there was a baby boom after the war; the same thing happened after the First World War too,’ says author and war historian Simon Fowler. ‘It wasn’t just England, of course – it was a phenomenon that happened all over the world.

‘People came back from the war to their sweethearts and there was work and employment for them.

‘While social and economic conditions were still fairly grim, there was a feeling of prosperity and people naturally wanted to start families, so the birth rate shot up.’

There are numerous examples of the birth rate peaking after natural disasters, believed to be due to a subconscious biological drive for the survival of the species.

For example, nine months after an 8.8 magnitude earthquake devastated Chile, the health minister reported ‘a marked increase in obstetric consultations in the most damaged areas’.

While after floods hit Gloucestershire in 2007, the county’s birth rate increased from 5946 to 6730, and Tewkesbury – where the floods hit hardest – experienced a two-decade high.

Unsurprisingly, with 3.5m British serving in the war, there were very few babies born in November 1940 – 14 months after Germany invaded Poland.

But, almost two years after VE Day, with the troops settled back into British life, the birth rate shot up and was 80% higher by March 1947.

Dr Jones says this post-war boom is the reason for both the boom in the 1970s and the current birth rate increase.

‘Depending on when these babies grow to become women and choose to have their first and subsequent babies, a repeating cycle is set up,’ he says.

‘Obviously, this main cycle applies to white British families and additional mini-cycles will commence in times of influx of immigrants.

‘However, the key point is that these cycles lead to periods of higher and lower demand for maternity beds and midwives.’

His analysis of Figure 1 reveals that the length of time from trough to peak after the Second World War has steadily increased.

If this rate of increase continues, then the present rise in birth rate, which started in 2002, should last 14 years, or more.

‘The current cycle of high births could continue to somewhere around 2016 before heading into the downward part of the cycle,’ says Dr Jones. ‘The basic message here is that current pressures could continue for at least another four years, plus a few more years on the other side of the peak.’

Recent figures released by the Conservatives show a 4.4% increase in the number of NHS midwives since the coalition came to power in 2010. But, with the current baby boom not set to tail off for a number of years, according to Dr Jones’ results, there are urgent appeals for more resources.

Along with the e-petition piling pressure on the government, there are also demands that David Cameron honours his pre-election promise for 3000 more midwives.

‘The excuse was that the number of births was no longer rising.

‘This is bizarre in the extreme given that in 2010, the latest year for which we have figures, the number of births in England was actually at its highest level for 40 years.

‘For too long, maternity services have been denied the resources they desperately need.

‘England is in the midst of a baby boom. David Cameron should reinstate his personal pledge for 3000 more NHS midwives and crack on with the job of delivering them.’

The situation is made even worse by the fact that women are starting families later in life. As revealed in last year’s groundbreaking Birthplace study, there has been a dramatic rise in women over 40 giving birth. 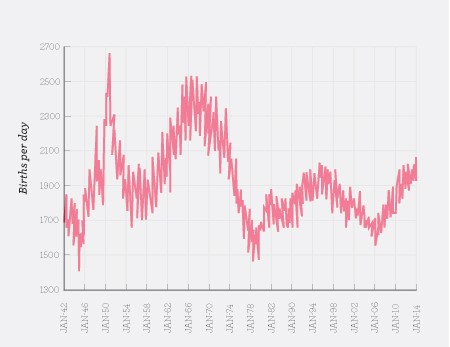 As birth for older women is more likely to involve complications, demand on midwives and maternity services is even higher.

Some have claimed that the influx of immigration from Eastern Europe over recent years is behind the high birth rate in the UK.

The extreme right-wing nationalists the BNP recently trumpeted, ‘we can clearly see from where the population increase is coming’, before going on to claim: ‘The schoolyard is where the changing population makeup is most evident. As these children grow up and have children of their own, we will become a minority across the board.’

However, such claims are swept aside by Dr Jones’ analysis of the statistics.

‘It is important to point out that the influx from the Accession Eight countries, which began in 2004, only added to the upward cycle which had already commenced from mid-2002,’ he says.

‘It is not the immigrants that caused this situation, it was the Second World War – the surge in immigration from Eastern Europe just happened to occur at the “wrong” time.’

There is also the question of seasons to consider and whether, within the larger cycles, there are smaller, annual patterns that have a notable impact.

Up to the 1970s, the month with the minimum number of births per day was typically November. In the mid-80s, it shifted slightly forward, before hitting December in the early 2000s, and the month with the least births is currently January.

Dr Jones tells Midwives seasonal patterns in births can arise from a diverse range of factors, ‘including cultural differences, holidays, variation in temperature and climate and social changes’.

However, Figure 2 shows that the range of variation in seasonal birth rates has declined greatly from the 1970s. This is likely to be due to the wider availability of contraceptives, in particular the increased uptake in the pill towards the end of the 1960s.

‘Births are becoming less seasonal as time progresses,’ states Dr Jones. ‘From a planning perspective, this makes the allocation of beds and staff across the year an easier matter.

‘It would seem that planning of midwifery services is very much a case of following the long-term trends.’

So, if the repeated cycle from the Second World War is still the dominant driving force behind the birth rate, then why wasn’t there better advance resource planning in place?

‘Attempts to forecast births get bogged down in arguments around demographic forecasts and trends in fertility rates, hence a fog of confusion leading to inaction,’ says Dr Jones.

‘Simply plotting the data for your local area going back to the early 1970s will usually be sufficient to give a workable time-trend from which to base a forecast. On this occasion, everyone seems to have missed the obvious by attempting complex but misleading analysis in the absence of the long-term view.’ 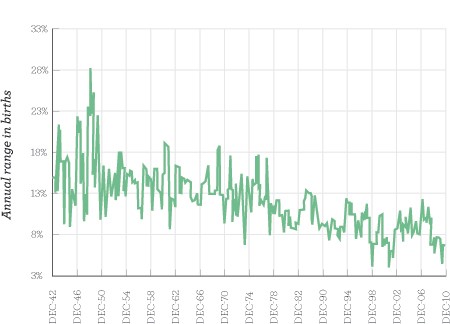 Looking to the future, if we are to ensure that the profession is ready for the next boom, Dr Jones believes we have just over a decade before the next surge in births.

‘The broad cycles initiated post-Second World War will continue to dominate the future trends at a national level,’ he says, ‘especially in localities which are predominantly white British.

‘Hence a cycle of midwife training should start somewhere around 2023, with advice from the Office for National Statistics on any new developments in the average age of mothers and births per mother.’

But foundation trusts have no obligation to hire newly trained midwives and, as Dr Jones states, ‘generally have no capacity and staffing standards other than to deliver a reasonably safe service at minimum cost’.

He believes ‘some absolute standards need to be introduced’ in order to ensure there are adequate resources and numbers of midwives to match demand.

In the meantime, if 68,000 more people sign Cathy Warwick’s e-petition calling for 5000 more midwives, a debate in parliament must be considered. With the issue discussed by MPs, and brought to the public’s attention, there would be a brighter future for the profession, even when the storm clouds begin to gather once more.

► Dr Rod Jones is a statistical adviser at Healthcare Analysis and Forecasting.
If you would like to contact him, email: [email protected]