In a new series highlighting UK professors of midwifery, Jayne Marshall explains how research is not the only route to a professorship, and Helen Cheyne reflects on her own unexpected career path.

Jayne Marshall is living proof that midwives need not be immersed in research to become professors of midwifery. Indeed, she hopes her career will prompt midwives, who might otherwise have thought that being a professor was not a practical option, to pursue that path.

There are two ways to become a professor in midwifery: through research, and learning and teaching. Most midwifery professors will have gone down the research route, but Jayne says the other path is a good alternative: ‘My career has predominantly been through educating the next generation of midwives. I feel that I may inspire other midwives who might be in academia, in a lecturing rather than a research role, to see there is a potential for them to become a professor too.’

Her career began with nurse training at Guy’s Hospital in London, followed by midwifery training at King’s College Hospital. Following completion of a PGCEA teaching qualification, her first post was as a midwifery lecturer at the University of Nottingham. Here, Jayne completed a Doctor of Philosophy degree in 2005 and was promoted to associate professor. In 2014 she took up the role of head of the School of Midwifery and Child Health, and NMC lead midwife for education at Kingston University and St George’s, University of London. She became associate dean for practice education and workforce development across the faculty and was then promoted to professor of midwifery through the learning and teaching route. In July this year she was appointed as the first professor of midwifery at the University of Leicester.

Jayne won the RCM award for excellence in midwifery education in 2013 and the Lord Dearing award for her outstanding contribution to the development of teaching and student learning in 2012. She has written a number of midwifery texts, and is co-editor of the world-renowned Myles textbook for midwives.

Jayne says the qualities needed to become a professor include being willing to share knowledge and experience with others. Enthusiasm for the profession is also vital. ‘The title is an indication you’ve reached a high point in your midwifery career,’ she says. ‘It gives people a sense that you’re someone who really knows what they’re talking about.’

Maintaining that knowledge is crucial: ‘You are an ambassador for midwifery,’ says Jayne. ‘With the title of professor you are upholding standards, both academically and behaviourally. That can create a lot of pressure for the individual.’

At the University of Leicester, in partnership with the University Hospitals of Leicester NHS Trust, she is developing a four-year undergraduate pre-registration MSc in midwifery with a leadership programme, aimed at aspiring leaders of the profession.

‘The students will have contact with leaders in clinical areas from day one,’ she says. ‘We hope to fast-track graduates into leadership roles.’

She adds: ‘If I think about how I’d like to be remembered, it would be for starting this programme. It will put midwifery and the University of Leicester on the map in terms of developing the leaders to take the midwifery profession forward.’ 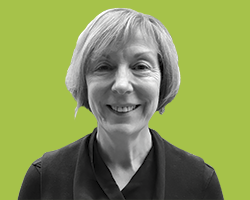 Today, Helen Cheyne is professor of maternal and child health at the Nursing, Midwifery and Allied Health Professions Research Unit (NMAHP RU) at the University of Stirling and RCM (Scotland) professor of midwifery. She has designed and led a number of large-scale trials and evaluations of complex interventions in maternity care. But she started out as a frontline midwife who had never given much thought to research as a career.

After qualifying as a nurse, she trained as a midwife in 1980 and took a post at Glasgow Royal Maternity Hospital before going to work in rural Elgin. When she returned to Glasgow, she went back to her old workplace to ask for a job and the post they suggested involved some research.

Helen says: ‘They had this post in a day care unit for women with high blood pressure. It was innovative because, at that time, everyone with high blood pressure was admitted to hospital and languished in the antenatal wards. Half the post was research and, when I had a child and went part-time, that was the bit of the job that I stayed with.’

Helen started to apply for small grants to do her own research, mostly around high blood pressure in pregnancy and midwifery care. Then, in 1990, the hospital was involved in a three-year trial looking at midwifery-led care, and she joined the team as a junior researcher.

‘That was a great experience because I had a team around me and I learned such a lot from them,’ says Helen.

When the trial finished, she continued with her substantive post and applied for funding to do research around it. With a grant, she could buy some time to concentrate on the research or pay for short secondments for other midwives. And, as there was no affiliation with any particular university, Helen worked with the academics who seemed most appropriate. She acknowledges that she was lucky to have such a post: ‘It’s only when I reflect now that I realise how unique that was. It was a really interesting time.’

Helen took a secondment to Stirling University in 2000, which led to a permanent post the following year. She worked for the Nursing Research Unit, which became NMAHP RU.

Today, Helen leads a programme of research in maternal and child health and coordinates the SMART midwifery collaboration. She also has a link role as deputy director of the Stirling Centre for Child Wellbeing and Protection, focusing on infant and child health and wellbeing, and integration of health and social care in the early years.

Helen achieved the title of professor, both at Stirling and at the RCM, in 2012: ‘Before then, it hadn’t really occurred to me – I had my head down doing research, writing papers and applying for the next research grant. Then I thought that being professor might give me some leverage in applying for grants and that people might take me more seriously.’

Helen never set out to be professor, but she hopes other midwives will see it as a career option: ‘Midwives now have the opportunity to contribute to the evidence base underpinning their own profession.’