Jane Plumb and Alison Stanley look at the changes to the RCOG guideline for GBS in mothers and their babies.

Group B Streptococcus (GBS) is a naturally occurring bacterium. In the UK, approximately 20% to 25% of women carry it, usually in the lower intestines and/or the vagina (Daniels et al, 2011). Carrying GBS is normal and is not associated with symptoms in the person carrying the bacteria.

GBS rarely causes infection, except in pregnant mothers, young babies and the very elderly. It is an uncommon but recognised cause of maternal infection during pregnancy and around labour, urinary tract infection in pregnancy, stillbirth (Seale et al, 2017) and preterm birth, although the association with preterm birth may be confounded by other known risk factors (Bianchi-Jassir et al, 2017). Importantly, GBS is the most common cause of serious infection in the first week of life (Cailes et al, 2017), and of meningitis in the first three months of life (Okike et al, 2014). After the age of three months, GBS infections in babies are rare.

GBS infection in babies is early-onset in 60% of cases (O’Sullivan, 2018), developing in babies from birth to six days after vertical transmission of the bacteria from mother to baby around the time of birth. Most early-onset GBS infection presents as sepsis and pneumonia.

The mainstay of preventing early-onset GBS infection is intrapartum antimicrobial prophylaxis (IAP), usually with penicillin, given to women either known to carry GBS or who have risk factors during the pregnancy or labour. IAP given to women carrying GBS will prevent most early-onset GBS infection (Lin et al, 2001), although at present there are no known ways of preventing late-onset GBS infection. The majority of high-income countries select which women to offer IAP based on the results of specific tests for GBS carriage late in pregnancy, while most low- and middle-income countries with a GBS prevention strategy use ‘risk factors’ to decide which women should receive IAP (Le Doare et al, 2017). The UK currently uses the risk factor approach (Hughes et al, 2017).

(New recommendations are in purple)

* If a woman carried GBS in a previous pregnancy and does not want to be tested, she can choose to be offered IAP. (Hughes et al, 2017)

Despite the rising incidence of early-onset GBS, the UK National Screening Committee does not currently recommend introducing a national screening programme to offer all pregnant women testing for GBS, citing concerns about overuse of penicillin (UK National Screening Committee, 2017). However, similar percentages of women have been shown to have risk factors as carry GBS in the UK, though with little overlap (Daniels, 2011) – see chart on page 58. This suggests a broadly similar proportion of women would be offered IAP in each strategy, although many more of the women carrying GBS around birth will be offered IAP with testing than with risk factors.

The RCOG published a major update to their guidelines last year: see the panel, left, for the new recommendations.

The RCOG recommends a different test than that often used in current practice. The GBS-specific test, described in more detail by Public Health England’s (PHE’s) UK Standard (PHE, 2018) requires samples from both the low vagina and the rectum. These samples are then processed using an enriched culture medium (ECM) to facilitate the growth of GBS and avoid overgrowth of other micro-organisms. These two changes to common practice almost double the likelihood of detecting GBS (CDC, 2010).

If your trust does not offer ECM tests, or a woman wants to be tested but does not qualify, tests are available privately. Charity Group B Strep Support’s (GBSS) website has a list of organisations that offer the ECM test using the appropriate methodology described by the RCOG (gbss.org.uk/test). Provided the test is performed by an accredited laboratory, where GBS carriage is detected incidentally or by intentional testing, women should be offered IAP (Hughes et al, 2017).

There are other changes to the prevention protocol described in detail in the RCOG’s 2017 guideline. Examples include the action recommended for pre-labour rupture of membranes at term in a woman known to carry GBS (offer IAP immediately, and induction of labour as soon as reasonably possible), waterbirths (no contraindication for IAP), membrane sweeps (no contraindication in women who carry GBS).

There are also clear recommendations about the care of the newborn baby, including the need for and frequency of observations. 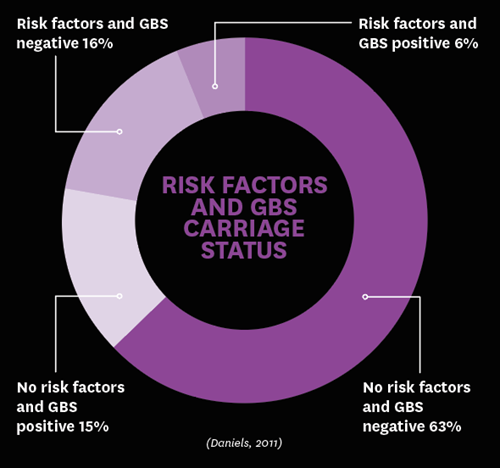 Has your department updated its guidelines?

The revised guidelines include major changes which, if fully implemented, should mean fewer babies will develop early-onset GBS infection.

Implementing new guidelines into local practice can take months if not years. But, until guidelines are in place, trusts are leaving themselves open to poor outcomes that could have – perhaps would have – not happened had the guideline been updated.

Will you be the GBS advocate for women to ensure the protocol is updated? Will you find the person in your department responsible for making sure the protocols are up to date, and ask them to ensure it’s changed? It could make such a difference.

Information for parents and for you

Midwives play a vital part in the dissemination of information to expectant and new parents, and need high-quality information themselves.

New and expectant parents are becoming better informed about GBS, not least as more pregnant women are being provided with the joint RCOG/GBSS patient information leaflet as recommended by the RCOG. GBSS is supplying free copies of this leaflet to the NHS on request. Many maternity services are already using this leaflet, and it is included in several pregnancy apps. Is your service using it? If not, why not?

However, sometimes there’s no time to read a full guideline. So why not tear out this article and keep it in your bag? Or use GBSS’s eight-page summary of the guidelines? It includes the key recommendations, plus a two-page flow-chart of the antenatal, intrapartum and postnatal care recommendations. It’s free to download from gbss.org.uk/RCOG. Keep a copy handy (and give one to the person responsible for updating your trust’s protocols).

And finally, how will the new guidelines change your practice? If you’re a community midwife, when in your schedule of care will you give out the leaflet? If you’re a hospital midwife, are you clear about when you should be offering IAP? If GBSS can help, get in touch via gbss.org.uk