In the UK, consultant midwives are growing in numbers, but a crisis is looming. Caitlin Wilson, Lyndall Hall and Rupa Chilvers explain the findings from the Consultant Midwife Mapping Project.

The role of the consultant midwife was introduced by the Department of Health (DH) in 1999 in the document Making a difference. It was a blueprint for ensuring the retention of senior clinicians and promoting clinical midwifery leadership within the NHS. The vision for the role was to place consultant midwives at equal status with their obstetric colleagues, ensuring influence and effecting change at strategic level (DH, 1999). It was put forward that consultant midwives would be highly motivated, influential clinical experts grounded in advanced midwifery practice (RCM, 2009).

The role was defined by these key functions:

Why a mapping project?

Supporting consultant midwives in the UK, the RCM has facilitated an email- and meeting-based network. Although this provides an overview of how the role is being developed across the four countries, further information regarding midwives taking on the role and the impact of changes within the NHS on the role is important to evaluate in order to support workforce planning.

In late 2016, the RCM consultant midwives forum discussed the current situation of those in the post. It was determined that despite the consultant midwife network, the current numbers were unknown and the Consultant Midwife Mapping Project (CMMP) was developed.

The aims of CMMP were to:

Although there appears to have been an increase in consultant midwife numbers in England, almost no data exists on tracking changes in numbers of consultant midwives in post in the other UK countries.

A survey was sent out by email to the RCM networks for consultant midwives, HoMs and directors of midwifery to complete and return. In total, there was a 100% response rate from trusts and health boards in Northern Ireland, Wales, Scotland and the Channel Islands. In England, 61% of trusts responded, making an average response rate of 87% across the UK.

This coverage was likely to have captured a majority of consultant midwives, giving a good overall picture of the current situation in the four countries.

At the time of the survey, the role of the consultant midwife was far from certain, with financial and managerial influences dictating the uptake of the role at regional level. National-level investment and support is needed to ensure that the consultant midwife role continues to serve women and to impact care service delivery and cultural change at a strategic level.

Midwifery 2020 (Chief nursing officers of England, Northern Ireland, Scotland and Wales, 2010) forecast an impending gap in a skilled workforce within maternity services across the NHS by 2020. This prediction is mirrored in the CMMP, which found that nearly two-thirds of consultant midwives in the UK are aged 50 and over (see chart, above right).

In Scotland, all the consultant midwives in post at the time of the survey were aged 50 and over. The consultant midwife body may experience a significant deficit in knowledge and skills if succession planning is not placed at the forefront of local and national agendas for workforce planning. 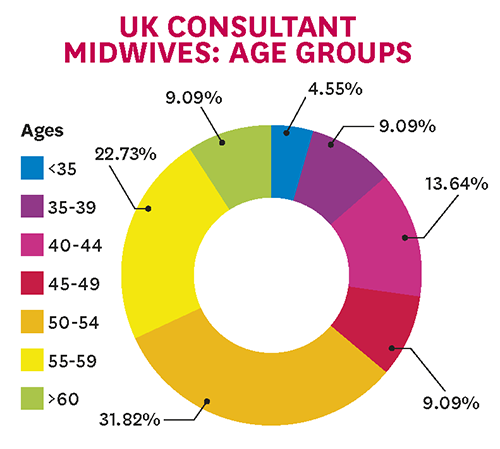 Through recent national reviews and policies, such as the national maternity review in England, Better births, and Best start in Scotland, there is heightened focus on leaders of maternity services to deliver safe, effective, high-quality care to women and families. Consultant midwives are pivotal in the development and achievement of this agenda. Furthermore, consultant midwives are ideally placed to ensure sustainability of service-level changes by the nature of their role within maternity services.

The CMMP was the first national-level survey that aimed to review the consultant midwife workforce in all four countries of the UK. Although the overall number of consultant midwives is increasing, more work is needed to understand the challenges and barriers to uptake of the role in UK trusts and health boards.

Further review may highlight the educational and political support that is required to develop talent management and clinical leadership within the consultant midwife role. This will lead to an expansion of the role, ensuring the ongoing delivery of high-quality, safe and innovative maternity care.

Caitlin Wilson is a consultant midwife at Worcestershire Acute Hospitals NHS Trust/University of Worcester, Lyndall Hall is a midwife who worked on this project as a Better births midwife with the RCM, and Rupa Chilvers is a technical specialist in healthy systems and policy, and RCM advisor