Battle in the bloodstream

When a mother’s antibodies attack a fetus’s blood platelets, it can have life-threatening consequences. Matthew Hopkins looks at the science behind fetal/neonatal alloimmune thrombocytopenia.

Fetal/neonatal alloimmune thrombocytopenia (FNAIT) is the most common cause of severe thrombocytopenia – a low blood platelet count – in the fetus or newborn (Mella and Eddleman, 2015). It is a rare complication in pregnant women: incidence in a Caucasian population is estimated at one in 1000 to 5000 live births (Arnold et al, 2018).

Intracranial haemorrhage (ICH) is the most serious complication of FNAIT, occurring in 10% to 20% of cases, and can lead to severe morbidity or mortality (Peterson et al, 2013). 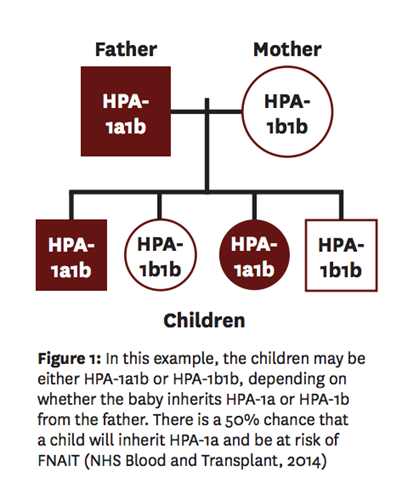 Platelets include blood group antigens that the mother can make antibodies for. Platelet-specific antigens inherited from the father but absent in the mother cause an immune response generating maternal antibodies (immunoglobulin G, or IgG) that bind to and destroy fetal/neonatal platelets. The most common cause of severe thrombocytopenia in an otherwise healthy newborn is maternal alloantibodies to human platelet antigens (HPAs) (Burrows and Kelton, 1993).

HPAs are localised either to platelet glycoproteins GPIIb/IIIa, GPIa/IIa, GPIb/IX/V or to GPI-linked anchor membrane molecule CD109. Platelet glycoproteins are cell surface molecules essential for normal haemostatic processes, platelet adhesion and aggregation. These alloantigens are expressed as bi-allelic alleles termed ‘a’ and ‘b’. For example, a person may be HPA-1a1a, -1a1b or -1b1b (see Figure 1).

A diagnosis of FNAIT is confirmed serologically by detection of maternally derived alloantibodies in the antigen-negative mother. The child inherits the cognate alloantigen from the father, and the mother’s immune system identifies the antigen as foreign before initiating an immune response (see Figure 2). Antibodies directed to HPA-1a and HPA-5b cause approximately 95% of serologically confirmed cases of FNAIT in a Caucasian population. HPA-1a accounts for approximately 80% of these cases, and 15% are due to HPA-5b alloantibodies (Mueller-Eckhardt et al, 1989).

Neonatal thrombocytopenia is rare; around 98% of full-term newborns have a normal platelet count, between 150 to 450 x 109/L (Chakravorty and Roberts, 2012). But thrombocytopenia develops in 22% to 35% of infants admitted to neonatal intensive care (Roberts and Murray, 2003). 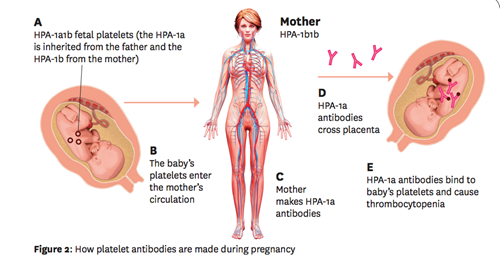 FNAIT can occur in first pregnancies, and identifying the condition usually occurs after birth. Severity is variable, so detecting signs and symptoms can be difficult. Careful examination of the infant may discover petechial haemorrhages, purpura, ecchymosis and gastrointestinal or genitourinary bleeding. Platelet counts will typically show less than 50 x 109/L in severe FNAIT. However, the infant may be asymptomatic if the platelet count is greater than 50 x 109/L, and thrombocytopenia can often be discovered only by chance (Bertrand and Kaplan, 2014). After ruling out viral and bacterial infection, disseminated intravascular coagulation and conditions caused by placental insufficiency, FNAIT can be diagnosed.

Evidence suggests that ICH can cause cerebral impairment. As many as 75% of ICHs occur in the fetus, as opposed to the newborn (Mella and Eddleman, 2015), thus requiring the use of cranial ultrasound to investigate signs of the complication. Other risk factors associated with severe thrombocytopenia are length of gestation (pre-term) and low birthweight.

If FNAIT is suspected, samples should be sent without delay to the histocompatibility and immunogenetics (H&I) laboratory at NHS Blood and Transplant, Filton, which provides specialist tests for the detection and identification of platelet-specific antibodies (Green, 2017).

Additionally, the parents and infant (if available) are HPA genotyped to identify any antigenic differences between the family members. Fetal HPA genotyping from amniotic fluid can also confirm whether the implicated alloantigen has been inherited from the father. Identifying the zygosity of the father can aid in predicting the risk of FNAIT (see Figure 1).

Sample requirements for laboratory investigations are 1 x 6mL clotted blood and 1 x 6mL blood containing EDTA (a preservative) from the mother, 1 x 6mL EDTA from the father and 1 x 1mL EDTA from the infant if available.

Platelet counts in newborns typically return to normal during the first two weeks of life with or without intervention because of the reduction in circulating maternal antibodies. However, if FNAIT is clinically suspected, with a platelet count below 30 x 109/L and evidence of bleeding, platelet support for the newborn should not be delayed while waiting for laboratory confirmation.

The 2013 Guidelines for the blood transfusion services in the UK advises that neonatal platelet counts should be maintained above 30 x 109/L or 100 x 109/L if major haemorrhage is evident (JPAC, 2013). NHS Blood and Transplant provides specialist stock of ‘on-the-shelf’ neonatal platelet components that are phenotypically HPA-1a(-) -5b(-). These products are held in strategically placed holding centres throughout England and are usually effective in 95% of FNAIT cases due to the prevalence of HPA-1a and HPA-5b antibodies (Mueller-Eckhardt et al, 1989).

If HPA-typed platelets are not available, or in emergencies, washed maternal platelets or random donor platelets with the addition of intravenous immunoglobulin G (IVIgG) (0.4 to 1.0g per kg per day) can be used. All platelet products should be from a single apheresis donor (one whose blood is separated into its components and the platelets isolated) and, in addition, must be cytomegalovirus (CMV) negative, ABO Rh compatible and gamma irradiated in order to prevent graft vs host disease. Typically, a neonatal dose would be 10 to 20mL/kg (JPAC, 2013).

There are currently no UK guidelines for the most effective antenatal treatment of FNAIT; the following are recommendations based on evidence-based practice.

In subsequent pregnancies for women who are alloimmunised, FNAIT can often be more severe. These pregnancies are closely monitored by the consultant obstetrician, neurologists and specialists at the fetal medicine unit in conjunction with haematologists and H&I consultants. Ultrasounds are carried out at 20 weeks’ gestation to identify signs of fetal abnormalities such as ICH or ventriculomegaly. The mother will also be screened regularly throughout her pregnancy for development of HPA antibodies.

If maternal HPA-specific antibodies have been identified, an antibody card indicating that the mother will require antigen-compatible blood products will be issued by the H&I laboratory to mitigate the risk of the mother developing post-transfusion purpura. Fetal HPA genotyping from amniotic fluid can be performed if there is paternal heterozygosity or if the father is unknown, but fetal sampling increases the risk of adverse events by up to 10% (Paidas et al, 1995).

Several different treatment options are available, which range from conservative to interventionist. First-line antenatal treatment for mothers who are alloimmunised is IVIgG (1g per kg of body weight at weekly intervals) from 18 weeks’ gestation, usually in isolation or in conjunction with corticosteroids. A planned CS should be considered, and HPA-1a(-) -5b(-) platelets should be on standby. If neonatal bleeding is severe, they can be transported as a ‘blue-light’ emergency.

Intrauterine transfusion of HPA-1a(-) -5b(-) platelet hyperconcentrates can be given while fetal blood sampling is performed. These products only have a shelf life of 24 hours, and the laboratory requires at least one week’s notice in order to arrange a suitable blood donor to provide this product. But the high risk of fetal morbidity and mortality means this treatment option should only be considered if the first-line treatment therapy fails (Lucas, 2009).

Matthew Hopkins is a clinical scientist working in histocompatibility and immunogenetics at NHS Blood and Transplant, Filton

Daniela Clark of Surrey gave birth to Jessie at full-term by emergency CS. She says: ‘In the delivery suite, my husband and I noticed some purple bruises on Jessie’s cheek and shoulder. The midwife said that these were Mongolian birthmarks, which fade in time. But the marks spread all over Jessie’s body as the hours passed. Eventually, a senior midwife saw something was not right and called for an examination. Jessie was rushed to intensive care. We now know she was covered in petechiae and her platelet count was only 6 x 109/L. She was at risk of intracerebral haemorrhage and needed an immediate transfusion and a brain scan. Thankfully, the scan showed no damage, but Jessie’s platelet count continued to yo-yo until several transfusions and two weeks in hospital stabilised her condition.

‘For my next pregnancy, I started weekly IVIgG infusions, plus daily prednisone steroids from week 20, doubling the dose at week 32. The side effects were nasty, and knowing that your immune system is attacking your baby made me feel powerless and guilty. Lucas was born with a low platelet count of 64 x 109/L. But he left hospital after nine days and only needed one blood transfusion.’ (Adapted from Clark, 2018).